I stand with the sisters in Myanmar！
Hisae Ogawa
CODEPINK Osaka
I was born in Osaka city Japan in December 1945, the year Imperial Japan finally surrendered to the Allied Forces.
Let me touch upon the brief history of the wars of imperial Japan committed.
Back in 1910 the Empire of Japan annexed the Korean Empire and Japan ruled Korea until 1945.
In 1931 Japan invaded China and occupied Manchuria. Then in 1937 the Marco Polo Bridge Incident, which led to the Second Sino-Japanese War took place in Beijin.
And finally in 1941 Japan attacked on Pearl Harbor and ended up with surrender in 1945.
The historians call this period “15 Years of War”.The Japanese Imperial army boosted the pseudo plan of the “Greater East Asia Co-prosperity Sphere”.and invaded and occupied the countries in Southeast Asia, South Asia and Oceania including Myanmar then called Berma. Japanese army massacred countless innocent citizens in those countries.
Therefore Japan as a country, is obliged to make the formal apology to those nations and compensate the victims for their big loss. We, the Japanese citizens are obliged to push our government to work on that direction.
That’s why we stand with sisters in Myanmar fighting for democracy now.
Lastly,I’d like to touch my family history in this period a little,
My uncle on my father’s side was drafted, sent to China got injured in the battle and died in Shanghai in 1940.
Another uncle on my mother’s side was drafted and sent to Kure near Hiroshima. He entered Hiroshima city right after A bombing and was exposed to radiation. He died of cancer later.
In 1945 March US air raids on Osaka city started and on March 14 my parents home and its neighborhood were burned to ashes.
The war was over finally on August and I was born in December that year. My family lost our home in the air laid. So we had to live in a retreat temporarily and I had been brought up there.
I’m so indebted to my mother for giving me a birth overcoming the great difficulties during the war. Her message was No more War. Peace for all.
. 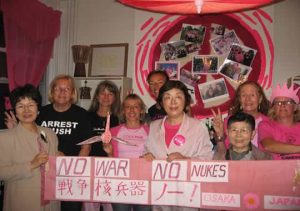